Flood Plain “Gotcha”(Would you have known this one?) 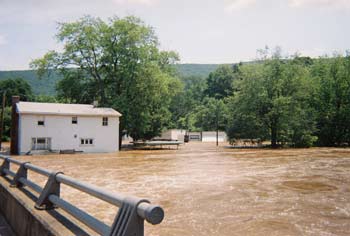 Here’s a reminder of how easy it can be to overlook important information when representing clients in a transaction. I’m sharing it in the hopes it will help someone avoid making the same mistake in the future:

Home buyers Bob and Ellen (not their real names) weren’t looking for a property in a flood-prone area. They had all of the typical concerns of first-time home buyers, and adding a 100 year flood plain to the list was not something they planned to do.

But after weeks of touring homes that they couldn’t see themselves raising a family in, they fell in love with a nice-looking 8-year old split level on a quiet street. Finally, room for their growing family!

While the home’s tax records only listed square footage for the upper level, the lower level had been nicely finished off with a family room and a walk-out slider to a flat back yard. This lower level square footage was advertised as part of the listing detail.

Before making an offer, Bob and Ellen determined that the property was in a 100 year flood plain. After reviewing flood zone information, researching flood insurance programs and talking with long-time residents of the neighborhood, they decided it was worth the risk.

From the buyer agent’s perspective, all seemed above board. The home buyers were making an informed decision. The insurance company had obtained the elevation certificate. The lender was aware of the home’s flood plain status, and the home appraised at list price after a full interior and exterior appraisal. A market review of the neighborhood showed that values had been appreciating nicely.

About a year later, an immense storm left Bob and Ellen’s basement flooded with about 6 inches of water. While they fared better than some of their neighbors, they still had to replace a few feet of drywall and all of the downstairs flooring. It seemed like simple work, so they did it without obtaining a permit, but then decided to check with the county about permitting anyway.

It was the call to the county that dropped the bomb.

Permitting the repairs was not only out of the question, it was a moot point! Their lower level was below the minimum elevation allowed for “habitable area”, due to the elevation of the surrounding flood plain. The basement should never have been finished off in the first place.

A quick search of online county records showed that the building permit had been issued subject to a Flood Hazard Certificate which stated that no habitable area in the home could be below a certain minimum level. That minimum level was a good 8 feet higher than the actual elevation of the lower floor.

Bob and Ellen were left between a rock and a hard place. They had a duty to the lender after the storm to restore the home to its undamaged condition, but the county was telling them that by doing so they had violated building code. And essentially, their home’s re-sellable living space had just dropped by one-third.

In the end, there was no big resolution. The county agreed to forget they had called, and Bob and Ellen will continue to use their lower level as they did before. However, they know they’ll need to disclose this issue when they sell their home someday, and it will adversely affect their resale value.

Here’s how to avoid having this happen to your clients:

If you’re selling in any area prone to flooding, check the building permit to see if there’s any level of the home that is not allowed to have habitable area.

Be especially cautious if the furnace and water heater are on the upper floors. This might be because no appliances are allowed on the lower floors, an indication of uninhabitable area.

Understand that even if neighboring homes with the same floor plan also have finished basements, that does not mean there’s not a problem.

Know that a lower level can be classified as uninhabitable area even if it is not below grade.

Be aware that even though it should be in their best interests, apparently lenders and insurance companies do not keep an eye out for this type of issue.

How to Read a Flood Insurance Rate Map Tutorial:
http://www.fema.gov/pdf/fhm/ot_frmsb.pdf

How to Win With Home Buyer Consultations (#007)

How to Win With Home Buyer Consultations (#007)